Herscherik Greisis (5 years old)
† 7th prince of the Greisis Kingdom into whom Hayakawa Ryouko reincarnated.
† Your typical fantasy-prince with blond hair and blue eyes. Although he grew up well, he was no good at physical activities, bad at magic, and while beautiful, couldn’t hold a candle to the rest of his royal family—a sad prince
† While masquerading as a harmless 5-year-old, he uses his past life’s knowledge and office skills to face his problems.

Schwartz Zweig (?? years old) Nickname: Kuro
† Herscherik’s chief butler.
† A handsome butler with black hair, red eyes, and a shadow of mystery. A first-rate, allrounder of a butler who is equally capable as a spy, fighter, butler, and housekeeper.
† He is calm, composed, merciless, and peerless, but nevertheless a faithful dog to Herscherik. Appears to be diligently polishing his patissier skills for Herscherik’s sake as of recently.

Octavian Ordis (18 years old) Nickname: Oranju, Oran
† 3rd son of the Blazing General, Roland Ordis.
† A failing student who barely graduated from the Knight Department in the Academy and skated by life until he was inaugurated as Herscherik’s personal knight.
† Sunset-colored hair with a mixture of orange and golden strands. Slightly drooping blue eyes the color of sapphires. These gave off the impression of a calm young man.
† He may look flashy, but he does everything diligently. Has a personality so fit to become a knight that outsiders think that he couldn’t be anything but one.
† Because of an incident in the past, he hated the kingdom and the royal family.
† Extra: Planned by me to be the strongest knight. Using him on a battlefield would be like cheating. As stated in the story, Kuro wouldn’t win against Oran.
† I strayed quite a bit when coming up with Oran’s name. It was fun writing Oran’s and Kuro’s interactions.

Marcus Greisis (18 years old) Nickname: Mark
† 1st prince of the Greisis Kingdom and first in line to the throne.
† Red hair like burning fire and red eyes like polished rubies. Despite being male, he is bewitching. Classmate of Oran’s.
† After graduating from the Academy, he became a knight affiliated with the Military Bureau. He still has to attend to his duties as the king’s heir.
† He tends to be very passionate and ends up brooding over things by himself because of it. Has a strong sense of responsibility.
† He had assumed that Oran would become his personal knight, but with their divide after the incident, he is filled with a deep regret.
† Extra: Imagined him as the cool red-type guy in a squad.
† His name comes from a combination of the red planet Mercury and Mercurius.
† Although his and Oran’s interactions aren’t BL, I made them give off a BL feeling as I tested how far I could take it.

Baron Armin (in his 50s)
† An aristocrat who managed the orphanage.
† Black haired, but as there is much more white hair now, it appears to be gray.
† His gentle personality is uncommon among aristocrats.
† However, because the orphanage business and management were on the decline and he was burdened with debt, he was corrupted.
† Accepting the offer to sell the Church’s drug, he even used the orphans in this endeavor.
† He knew he shouldn’t be doing it, but felt he had to sell them in order to prevent the orphanage from being demolished.
† Extra: The baron didn’t know that the cause of Oran’s fiancée’s death was the drug.

Colette (5 years old)
† Girl from the orphanage.
† Brown hair eyes. Because her father was a soldier who lost his life in battle and her mother passed due to sickness, she was taken in by the orphanage.
† She is very fond of Oran.
† When she saw Herscherik, she thought he was like “a prince that came out from a picture book!”
† Extra: He actually is a prince!

Rick (8 years old)
† Boy from the orphanage.
† Navy blue hair and black eyes. Three scars on his cheek from an animal’s claws.
† A leader to the children in the orphanage. He lost both of his parents to an accident.
† Because of this accident, he grew to hate all aristocrats, besides the baron.
† He forgave the baron, but with the baron’s death, he focused his hatred on Herscherik, considering the death to be his fault.
† Extra: Colette and Rick are planned to appear later on.

Ignatz Navy
† Eldest son of Baron Envie. Former friend of Oran. Graduated from the Liberal Arts Department at the Royal Academy.
† He was Oran’s friend, but was envious of the talented Oran and even loved his fiancée despite her already being engaged to Oran. In reality, antagonized Oran.
† He learned that she was addicted to the drug and made advances on her using his access to the drug, but was rejected.
† He bought the drug from the orphanage and brought it to sell at high prices at the social gathering.

Information Broker (???? years old)
† An information broker known only by those already part of the underground and their acquaintances.
† Both her real name and origin are unknown, but she will provide information equal in value to her high prices.
† She owed Soleil a favor, so she promised that she would listen to just one request from the king, whatever it may be.
† Her true form is a dæmon with a long life span. Her other name is the ‘Witch of Infinity.’
† She is an abnormality among dæmons as she wanders around amongst mankind, living freely as if one of them since ancient times.
† Amethyst colored hair and heterochromatic eyes (the right is red with a beauty mark underneath while the left is golden).
† Currently, she appears as a voluptuous woman but ‘she’ possesses the ability to change her appearance and gender at will. Her age easily surpasses *beeeep* (censored) years old.
† Extra: At first planned to be a male, but seeing this story lacks females, I changed her into a woman. She’s not as young as a girl, bu— (Author is kicked) 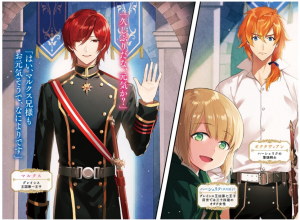 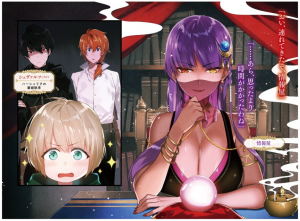 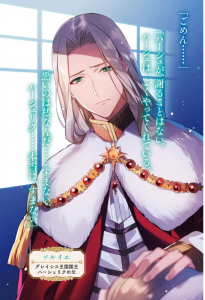