>
Chinese >
My Youth Begins with Loving You 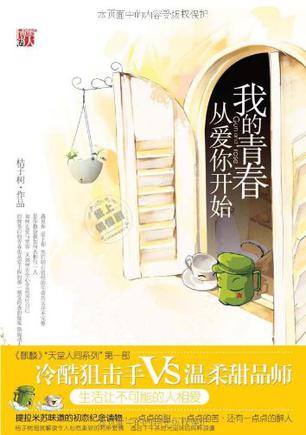 These days, all of the fine men have either already gotten married or already have a girlfriend.

If a man reaches thirty-two and he hasn’t married yet and he doesn’t have a girlfriend—nor has he ever even had a boyfriend or a girlfriend—then he definitely has some sort of physical defect.

Miao Yuan never thought that one day, she would fall in love with a Martian!

This year, the girl who was in her early twenties had countless strange ideas.

Chen Mo felt that this young girl had to be some kind of alien creature. He never thought that one day, they would live together on Earth.

He is a sniper. In ‘chen mo,’ he approaches the target. Armed with only a gun, he never fails to see his target’s blood fall—he’s a natural soldier. In the past, his only love was a slender gun.

She is a pâtissier. The fragrance of milk and honey wafts off the tips of her fingers. Delicately sweet-tempered and overflowing with laughter—she’s like a budding rose.

When the muzzle of the ice-cold gun meets the gentle and beautiful rose.

When the sweet cream melts the coarse bloodstains.

Life has a way of making the most unlikely people fall in love.

He thought these kinds of things only ever happened in those dust-covered fairy tales that have been lost with the passing of time—something that only ever happened in other people’s stories. Suddenly, the same emotions he had read about in these very stories began to appear in his own life. Like shy flowers, they grew in the corners of his heart, where they remained unnoticed until they bloomed.

Being in love is when when you’re willing to do things for a special person that you wouldn’t normally do for anyone else.

The earliest, most gentle, and happiest memories in our life are always sweet.

I want you to belong only to me, to gather you up into a safe little box that I can carry close to my heart.

At first, we didn’t understand what love is. We never knew how to love another person. Love was always this great mystery that we would fantasize about in our loneliness. We thought that love would be just like lightning and thunder, a violent and furious storm. We did a lot for each other and made many demands. We had to suffer through anger, heartbreak, happiness as well as pain, only to realize that love is not what we imagined it to be.

闷骚 – Mensao (“Outwardly cold or retiring but deep and passionate inside”)