Herscherik Greisis
† ~1 year old
† 7th Prince of the Greisis Kingdom into whom Hayakawa Ryouko reincarnated.
† Your typical-fantasy prince with blonde hair and blue eyes. However, he is kind of a disappointing prince, with no physical prowess or talent, an inability to use magic due to his lack of magical power, and looks that are, lacking in comparison to the rest of the royal family.
† A stubborn person who pretends to have a gentle disposition. Yet, he is truly soft-hearted, unable to overlook a person in need.
† Retaining his memories from his past life, he fights using his skills as an office worker and otaku to save this kingdom at the brink of failure (planned).
† Extra: The origin of Herscherik’s name is a parody of “Herschel,” another name for Uranus, the 7th planet in the solar system.

Hayakawa Ryouko
† 34 years old at the time of death
† An office worker serving at the head office of a certain listed company.
† Since birth, she was a serious otaku and had no boyfriend, a disappointing woman who preferred 2D over 3D (in other words, a woman unloved by men.)
† Hobbies were: reading (a bookworm with no real preference), gaming (regardless of genre and without consistency), learning skills (only those that she had an interest in).
† She lived while keeping her hobbies as a priority, but she was involved in a traffic accident on her way home after overtime on the day before her birthday, passing away.
† The next time she opened her eyes, she was reincarnated into another world.

Soleil Greisis
† ~35 years old
† 23rd king of the Greisis Kingdom.
† With platinum blonde hair, blue eyes, and the outer appearance of a 20 year-old, he is Herscherik’s father.
† Originally, he was quite far away from inheriting the throne as the 3rd prince, but due to various reasons, he became the one to wear the crown.
† His personality is gentle, and he is considerably modest. Unfortunately, he was not fit to be king. He understands his own personality and wants to do something for his declining kingdom and citizens, but in putting his family before his duties as a king, he chooses to become an ignorant monarch.
† Truthfully, he has high-specs: scholarly, yet can use magic and swords.
† Extra: The origin of Soleil’s name is “Sol” from the Sun.

Marquess Barbasse
† Minister of the Greisis Kingdom. An influential person who actually manages the government from behind the scenes.
† An attractive middle-aged man in the prime of his life who skillfully manipulates the king for his own purposes.
† Extra: His name transitioned from: a person whose hair was rustled (Bassabasa) → Bassabasa → Barubassa → Barubasse [Or as Caelum translated it, Barbasse]. Sometimes even I, the author, misspells it)

Count Luzeria
† 30 years old at the time of death
† Local lord of a remote region of the Greisis Kingdom.
† With the occurrence of a certain event, he incurred the wrath of Barbasse and his faction, and as such his wife and child were assassinated. The murder was ruled as an accident, but the count swore to take revenge for his family and worried about the continually declining kingdom. His desire to do something led him down a lonely path, but he once again caught the eye of the minister and his faction. The evil arms of assassins reached out to him, so he directly appealed to the king during Herscherik’s banquet in a last ditch attempt, but his efforts were turned against him and he was sentenced to death (forced suicide) for the crime of treason.
† He informed Herscherik of the country’s dismal situation and entrusted the future to him. The pocket watch that Herscherik holds belonged to Luzeria.
† So worn out was he by the time he met the prince, that he gave off the impression of being far older than he actually was.
† Extra: In the early stages, he was more of an old man.

Schwartz; nicknamed Kuro
† ?? years old
† Surname is Zweig (yet to appear in this volume)
† A handsome man with black hair casting a shadow over his red eyes. He was formerly employed as the spy ‘Shadow Fang.’
† Skilled enough to have an alias placed on him in the underground world, he was a spy who did each job by himself, dispassionate and directionless, and with no master.
† Excels in martial arts and with hidden weapons, but he could also use ordinary ones. He can do anything from assassinations to information gathering. He was born in an eastern country, but for various reasons, he was doing underground jobs in Greisis Kingdom.
† He doesn’t have any memories of his real name; Schwartz was the name Herscherik gave him and Zweig was the surname that belonged to a lineage that had long collapsed and all ties severed (Luke forged it.).
† His personality is calm, composed, cold-hearted, and peerless. However, he is a faithful dog, loyal to only Herscherik.
† Extra: After I finished writing him, I realized that completely resembles a certain demon butler.

Luke
† ~35 years old
† Primary butler for King Soleil.
† Childhood friend of the King. A stylish man in the prime of his life with very dark green eyes and hair.
† One of the few people the king places his trust in. A loyal retainer and aristocrat who had accompanied the king since they were babies. Even when Soleil made his worst decision as a king, Luke prepared himself to stay by the king’s side and follow him to the Depths of the Earth.
† Presently, his family has left the imperial capital because of the Minister’s schemes.
† Extra: Luke is surprisingly well-versed in espionage. Please judge it based on the time he managed to shadow Kuro without being noticed.

Meria
† 25 years old
† Herscherik’s nanny.
† A gentle, baby-faced woman with brown hair and droopy eyes. Was previously Hersche’s mother’s maid.
† Her hometown is in Count Luzeria’s territory.
† Extra: In the beginning, I had written her to be older and the nanny for the king and Luke, but it was a bit too unnatural, so I dropped that.

Viscount Grimm (later Count)
† An aristocrat belonging to the Minister’s faction whose illegal actions were discovered by Count Luzeria.
† After Luzeria’s death, he was made to manage Luzeria’s land.
† A deplorable man who despite trying to be sneaky, was remiss somewhere, leading to Luzeria discovering his crimes. Simply because his craftiness and his ability to sense danger could be useful, he was appointed a position under Barbasse. Later on, he misunderstood the documents Hersche had on him to be important ones that could be used against him (this was where he was absent-minded). He tried to turn the tables by attempting to assassinate the prince, but ended up having a taste of living hell.
† Extra: I want to write a short about this character later on.

Louise and her husband
† A married couple running a fruit stand when Herscherik snuck into the castle town.
† Beauty and the Beast. Louise is the cheery glamorous beauty while her husband is the gigantic, silent and unsociable bear.
† Extra: The husband’s name will probably never be introduced.

Information Broker
† ???? years old
† The information broker known by the underground people and their acquaintances.
† Their real name and lineage are unknown, but if you provide a huge sum of money, you will receive information equivalent to it.

The favorite mistress
† 20 years old at death
† Herscherik’s mother. Soleil’s beloved. One of the few people in the world without any magical power. Meria had said that she was a compassionate, bright, and wonderful young lady with blonde hair.
† Although the favorite mistress’ appearance was inferior to the princess consorts and concubines, that was only in comparison to them, who were on a whole different level; she was plenty beautiful on her own.
† Her social status was low, being born into a common merchant’s household, but a fateful encounter with Soleil lead her to propose anyway.
† She was closer to the other princess consorts, tremendously popular with the maids, and was strongly against the minister and his group.
† As her body had been weak from the start, she passed away while giving birth to Herscherik.
† Extra: This character’s name wouldn’t show up for the time being. I want to write a short story about her encounter with Soleil. 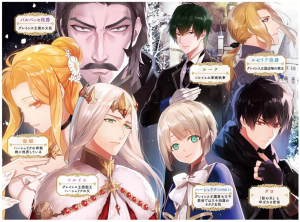 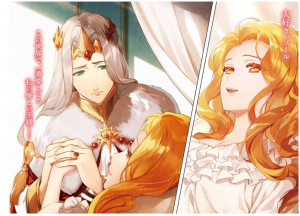 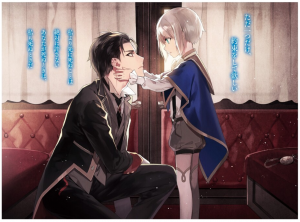 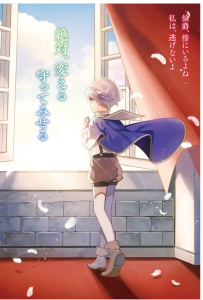