At the dense forest that spread out before “me,” I caught my breath.

Next, I began to laugh.

Because of the end of my 15 year hobby, I certainly drank a little bit, but certainly not enough to hallucinate about being tossed into the middle of a forest.

And tomorrow is work.

Rather, is it that… I thought I was awake but fell asleep at some point?

Recently, I’ve only been going between work and home so the true green hurt my eyes.

It was as if the sacredness of Nature was permeating my tired body. Even so, it will be bad if I don’t get ready for tomorrow. If I fall asleep in front of the PC, I will definitely have muscle pain.

The fingers of sunlight, the flying dragonflies, I can even hear the sound of cicadas. Looking far away, I can even see a sparkling lake reflecting the sun.

It’s said that dreams reflect your desires, so I wonder if in the depths of my heart, I wanted to walk through the woods? As I took one step toward the lake, cold sweat ran down my back.

“What’s with these feet…”

What I saw was expensive leather shoes without a single wrinkle. And looking at my body, a black suit. And an ankle length coat even though it’s such a hot season. If someone saw me now, they’d definitely say I looked like a mafia boss from somewhere.

(I have a bad feeling about this…)

Since a little while ago, my heart has been making an unpleasant sound. As I hurriedly ran toward the lake, I suddenly cut through the forest at the speed of a falcon.

At that bizarre speed, my bad feeling got even worse.

Finally, as I saw my face reflected in the lake — the feeling became conviction.

Reflected in the lake was the familiar last boss.

The “demon lord” that had plunged countless players into despair was there. As if that face found something amusing, a smile could be seen.

I’m not at an age that I can talk about other people, but this is too much.

In the first place, all of my five senses are telling me that everything is too real I can’t believe this is a dream. It’s unexpected, but is this what you would call that parallel world transfer that you often see in anime and manga?

Or maybe I had a heart attack and am already dead and am in heaven? No, if that’s the case, taking on Kunai’s appearance would be weird.

But hitting my cheek and head hurts.

If I breathe in, I can tell my lungs are working properly.

(Ugh! At least make it after I wipe my hard drive!) was the scream from my soul.

Going to another world is fine.

Even letting that part go, being transferred to another world as an old man like this is too much. At least make it a really handsome guy or a really rich one! And my hard drive! It’s important, so I’ll say it twice! Why do I have to end up a beefy old man of all things.

What did I do to deserve this!?

(At any rate, information… I have to find something…)

I walked around for a while after that, but it didn’t seem like I would wake up from this dream.

Instead, it seemed like moment by moment, my consciousness was adapting to this body and there is nearly no discomfort. Sometimes, the breeze would blow through the forest causing my body to tremble, as if telling me that this world was not an illusion.

(This world, this forest, what is it… isn’t there at least some hint)

Looking through my clothes, there was nothing that could help with the situation.

Inside the long coat were several of the knives that were Kunai’s favored weapon. Other that that, was Kunai’s favorite cigarettes.

If that’s the case, I guess I should give up and scream “that”? Massiv, who was one of the players had said “If you go to another world, you should certainly shout this.”

–Stillness spread through the forest, and a crow let out a single caw.

All I did was embarrass myself! I thought maybe some numbers or a screen would come out, but nothing happened, and it feels like the trees are laughing at me.

A black panel and keyboard-like thing appeared in the air and a screen to input my password appeared.

It’s this! This! I was waiting for this!

At the same time the password was accepted, countless commands appeared, but they were all blacked out, and I couldn’t even read the contents.

Written there was <<requirements not met>>.

I lost the strength in my legs and leaned on a large tree to my side.

“What requirements… What do you want me to do…”

Without thinking about it, I removed a cigarette from my pocket and lit it up. As I breathed out that familiar smoke, it was if that flavor was thrusting its reality at me.

It’s impossible to feel the taste of a cigarette in a dream. As I smoked a second, then a third, the inside of my head was still pure white. Actually, after smoking too much, I started to get dizzy.

“What should I do… If I knew something like this would happen, maybe I should have read more light novels?”

I couldn’t gather my thoughts and became irritated.

And the violent footsteps I heard from deep in the forest were getting on my nerves. No, wait… footsteps would mean there’s someone nearby?

Footsteps that sounded like they were running away from something grew closer, and finally, “that” made an appearance.

I tried to call out to him, but I wonder if Japanese would be understood?

It looked as if the kid had fallen somewhere because on his face and clothes clung black dirt, and it was hard to tell his gender. His hair was blond, his eyes were quite red.

It really doesn’t look like he’d understand Japanese, but in any case, I have no choice but to ask this kid.

(Kunai’s tone of voice was pretty smug and sarcastic)

He was a character I created myself, but since he’s the last boss, he didn’t come out very much….

While tracing back my memory, first I try talking to the kid.

When I looked, behind the kid was a monster with wings made out of bare bones — its body was a dull gray, giving it an appearance resembling that of a gargoyle from a fantasy world.

Seeing that form, the inside of my head became pure white, and on top of that, I could fee laughter welling up.

It seems I’ve wandered into a really weird world.

(No… maybe there’s something weird with my brain?)

In Japan, no, if you searched the whole world, there shouldn’t be a creature like that.

I want to scream.

“What should I say… Is that not-cute monster behind you your pet? Then I’d like you to train it to behave.”

“Please hurry and run away! That is a devil!”

What in the world am I getting wrapped up in?

“– puny humans, offer up your flesh and blood”

Without thinking, I drop the cigarette in my hand.

A monster with bright red eyes, looking at me as if I were “food” gradually coming closer is definitely a horror.

Rather, it’s just plain scary. I want to scream and run away.

The moment I try to dash and run away, the monster brandished its large hand and tried to claw my face at a great speed. There was a dull pain on my forehead and from within my eyes a flickering red light surged up.

It really attacked me…?

It tried to kill me?

From the depth of my guts, a strange emotion began to well up.

A deep voice that I couldn’t think of as my own, leaked out of my throat.

The moment the bewildered monster was within my field of vision, my right hand reached into my coat at a speed that couldn’t be seen.

(Wha, my body is automatically…!)

Contrary to my will, my hands and feet start moving on their own.

With perfect form, with speed like lightning — a knife was thrown!

In my head streamed the “battle log” data, the contents of which made me dizzy.

Before I realized it, the monster that attacked me was gone without a trace. Perhaps it was the impact from the knife, but its body was completely burst. With this, you can’t tell which of us is the monster.

Neither of us able to speak, a painful silence filled the forest.

Swallowing, I cautiously open my mouth.

“W-well, it’s …umm, ‘legitimate self defense.’ I didn’t do anything wrong.”

The gaze from the kid in front of me is painful.

“What the hell! What do you think I am!”

And thus, a single demon lord descended upon an unknown parallel world.

How will he, whose interior is just an ordinary person, live in this harsh other world. This is something that no one knows as of yet—

One part of the data was made available.

A great devil sealed long ago by the cherubim.
Able to control even superior devils, the individual called the “king” of devil-kind.
Its strength was drastically lowered due to being sealed and had nothing like its original strength, but due to its incredible defensive power, there should not have been anyone able to even injure it.
After having devoured a great number of souls and flesh to recover its strength, it would have brought hell upon the earth. 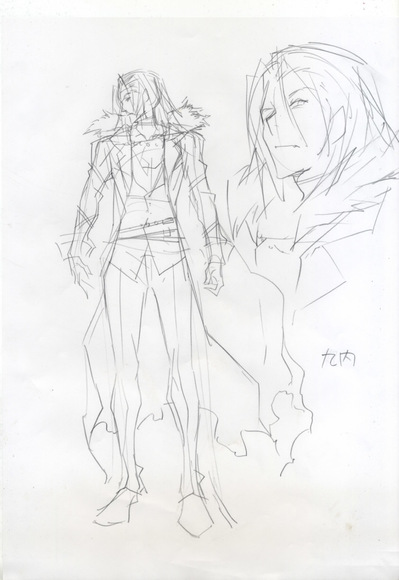 Weapon: Fire of Sodom
Knife capable of throwing as well as cutting.
Number, infinite.
Has a chance of inflicting “burn” as an additional effect.

Armor: Assault Barrier
Nullifies attacks from those who have not reached level 30.
Endurance, infinite.
Ineffective against “magic” which was not present in the GAME.

Personal Belonging: Imperial Code
Item to be given to the player who defeats Kunai.
Actually has no effect.
It has an effect not in the GAME, but in the real world.

Personal Belonging: Mild Heaven
The most popular brand of cigarettes in the Great Empire.
There also exist many other brands such as Buster and High Night.
Should they be called a system peculiar to the GAME?
Far from being unhealthy, they are a method to restore Vitality.

A normal working adult, Oono Akira, who is borrowing the skin and abilities of the GAME’s last boss.
Categorized as a normal person, but once he prepares himself he is quite ballsy.
Tempered by years of game administration as well as a working adult, he is capable of being an extraordinary performer in every situation.
As expected of one with the setting of a last boss, his status is incredibly high, but special mention should be made of his health which is in a completely different dimension.
He would appear invincible at a glance, but has absolutely no defense against “magic” which did not appear in the GAME, making him a very unbalanced being.
In addition, the “original personality” also firmly exists within the depths of his body.
Because of that, he is extremely cold-hearted and cruel ―― a genuine demon lord that stands at the summit of a heap 4,143,792 bodies and blood.

This time, I tried depicting the combat like a script this time. From now on, I will write it normally.

I’m using “he” as a gender neutral pronoun for the kid. Everybody can find out his gender along with Kunai.