>
Side Character Transmigrations: The Final Boss is No Joke >
Chapter 211

Bu Jingyun didn’t manage to release Shi Sheng before she caught his arm. Shi Sheng swapped their positions with a sudden, forceful jerk; now he was the one below.

Shi Sheng’s fingers wrapped themselves firmly around his neck. Bending forward slightly, she slowly lowered her head to look at him, allowing Bu Jingyun to see himself reflected in her eyes.

“Bu Jingyun, you got guts eh? You know what you’re doing right now? You’re taking advantage of me! Do you believe I won’t kill you?”

“Look at me. What’re you feeling guilty about now?” Shi Sheng forced Bu Jingyun to look at her.

Shi Sheng resisted the strong urge to cut him down with her sword at that moment. She released her grip on his neck, but remained seated atop him. “How come you’re here?”

“Is there anywhere in the Nine Provinces I’m not allowed to go?” Bu Jingyun gave her a lofty answer, though his gaze never stopped inspecting her. ‘I knew she was concerned for me! This pretentious woman!’

Shi Sheng rolled her eyes at him. “Then do you want to go to hell?”

‘Wasn’t this fellow supposed to be a zealous recluse? What’s he running out so frequently for?! Can’t he just obediently wait at home for me(bbb) to marry him?’

Shi Sheng suddenly grabbed Bu Jingyun’s lapel with one hand while the other undid his belt. She swiftly stripped the red clothes off his body.

Bu Jingyun was too slow to stop her, so he could only watch as his most beloved red outfit was violently torn to shreds by Shi Sheng.

“Shen Yaoguang! What’re you doing to Hallmaster?!” The Sentinel’s voice suddenly rang out from behind them.

He looked at the scraps of fabric strewn across the ground, and then at his Hallmaster laying under that shameless woman, depressed and helpless. It was hard for him not to imagine this woman forcing herself on his Hallmaster.

As a result, the flames of rage were fiercely burning in his chest. ‘This witch actually dared to treat Hallmaster this way! Simply… unbearable!’

“What could I possibly do to him?” Shi Sheng looked at the Sentinel in confusion.

‘I didn’t hit him, I didn’t scold him, all I did was strip him! Is stripping him really worth getting so agitated? I mean, did I say anything when I was being taken advantage of? What an overreaction…’

“Go back.” Bu Jingyun suddenly stood up and coldly stared at the Sentinel.

‘Hallmaster, you can’t have such a difference in treatment ah! How come you’re so lofty every time you see me? I am offended! Why can’t this loyal subordinate even measure up to a woman you’ve only known for a few months?!’

But due to Bu Jingyun’s overbearing suppression, the Sentinel could only return with an expression that practically screamed ‘my-Hallmaster’s-been-sullied-by-someone, but-he’s-siding-with-her! I-feel-like-I’m-losing-favour’.

Shi Sheng simply leapt back onto the tree.

Bu Jingyun quickly followed her up. Shi Sheng didn’t push him off this time. She didn’t mention what had happened just now at all.

‘It’s as if… it was something very normal to her.’

While Bu Jingyun’s thoughts were running wild, the sky slowly darkened. The Rainbow Lotus looked extremely beautiful as its glow lit up the dark night.

Once the moon had reached its zenith, the seven-coloured bud fully bloomed before everyone’s eyes.

The voices of both human and beast resounded at the same time as their figures shot like lightning towards the centre of the lake from both sides.

The flowering stage of a Rainbow Lotus didn’t last very long, only around five minutes altogether.

If it wasn’t plucked within those five minutes, the petals would fall off and it would immediately enter its fruiting phase.

And what could you do in five minutes?

It was enough for you to finish a cup of instant noodles.

It was enough for you to play a short game session.

It was enough for you to have an intimate date with your five ladies1.

It certainly seemed like a long enough time to simply pick a flower.

But from the looks of it now, it wasn’t enough time at all.

Humans didn’t want the magic beasts to obtain it, and the same was true the other way around.

Unfortunately for the humans, the magic beasts had the advantage of an aerial force.

Even if humans of the Spirit Monarch realm could fly too, it consumed spirit energy to do so. Naturally, this was inferior to the magic beasts that were naturally born with the ability to fly. A few slaps from them was enough to ground you!

“You want the Rainbow Lotus?” Shi Sheng, who’d been having fun watching the bloody spectacle unfold, suddenly turned to look at Bu Jingyun and asked.

She’d noticed that the people from Nine Silences Hall were attempting to steal the Rainbow Lotus in the chaos.

“No…” Bu Jingyun subconsciously shook his head, but quickly changed his tone, “En.”

“What’s so good about that thing?” Shi Sheng frowned and grumbled before pulling her sword out. “Wait here. I’ll snatch it back for you.”

Shi Sheng didn’t wait for him to finish as she charged off into the chaos.

She was very fast. While the humans were busy dealing with the magic beasts, she’d already made her way to the Rainbow Lotus. But just as she was about to pluck it, a pair of fair hands suddenly appeared beside her, grabbed the lotus and pulled it up by its roots.

The resulting sound attracted the attention of human and beast alike.

Shi Sheng followed the hands up to their owner, whereupon she felt a vein popping in her forehead.

‘FL-sama, it’s simply impossible to get away from you ah!’

Qin Langyue gave Shi Sheng a cocky look before retreating back towards the lakeshore.

That was when an abrupt change occurred.

Several silver tendrils erupted from the surface of the once-still lake and wrapped themselves around Qin Langyue’s calf, dragging her back.

Rare treasures, more often than not, had guardians, whether it be in the form of ferocious magic beasts or various types of plants.

The silver tendrils reaching out from the lake seemed to point towards it being the latter.

A few more tendrils erupted from the surface of the lake and shot towards Shi Sheng, forcing her to retreat for a distance away from Qin Langyue.

Right now, the entire surface of the lake was nearly covered entirely by these silver tendrils. The magic beasts had swiftly retreated away from grabbing range early on. However, the slower humans weren’t so lucky. They were easily dragged into the water and after a gurgle, a clot of darkness appeared in the depths of the water as the scent of blood diffused.

The giant snake used its tail to drag Qin Langyue along as it brute forced its way past the the sea of tendrils that reached out for them, making a beeline back to shore.

Shi Sheng was slowed down by having to cut down a few tendrils in her way, so she was behind Qin Langyue by a step.

The moment she got near, she heard Qin Langyue speak, “Shen Yaoguang has it!”

There was still a gigantic mass of tendrils waving about wildly on the surface of the lake. The people who’d been caught screamed for help, but were quickly dragged down into the water.

There was no hope for them.

The mass of tendrils had already blocked off everyone else’s views. Since Shen Yaoguang and Qin Langyue had been the ones closest to the Rainbow Lotus before it disappeared from view, there were only two possibilities as to who had it now.

But since Qin Langyue had framed her, Shen Yaoguang was definitely their prime suspect.

‘Who told me(bbb) to be such a professional villain? What else would I(bbb) be doing if not shouldering the blame for someone else? Isn’t that right, FL-sama?’

Please don’t make me shoulder any blame… and vote!

Remember to participate in the Mid-Autumn event in the book review section, little angels! 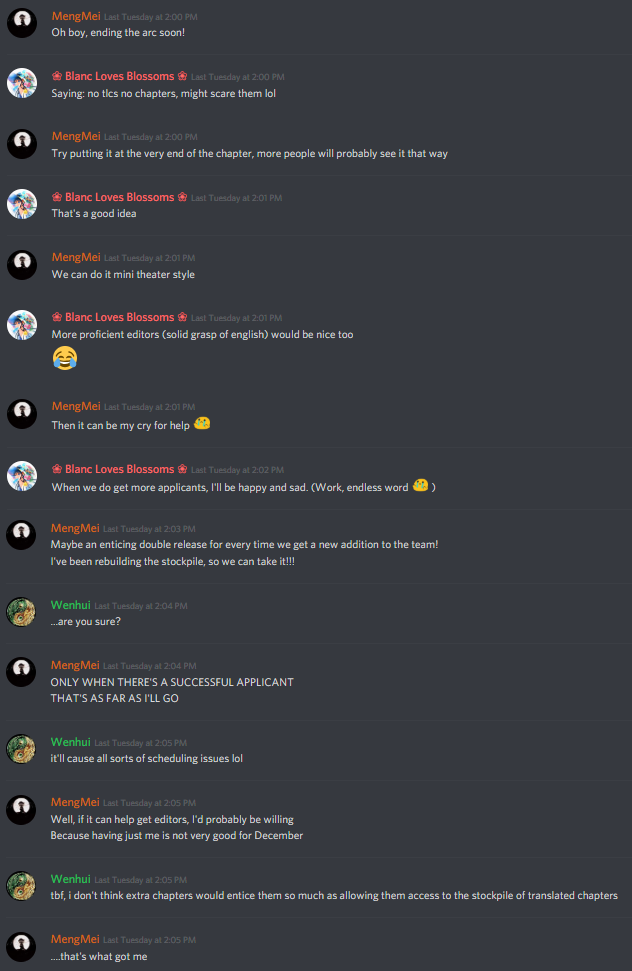 Want to read one arc ahead and help the community realize just how cool Shi Sheng is? Join the team! We’re looking for editors and translation-checkers (especially the latter) so we can reach our goal of daily updates in December.
Come, come, join us now!