>
Side Character Transmigrations: The Final Boss is No Joke >
Chapter 212

“Shen Yaoguang, hand it over!”

Shi Sheng flicked her sword as she glanced at Qin Langyue, who was being hugged by a handsome yet slightly intimidating man.

Upon recognising the man, she had the urge to claw at a wall. ‘That Snake King actually became one of the FL’s conquests. Simply… a disgrace to magic beasts!’

Shi Sheng could no longer be bothered to clear her name.

‘Since they’re already in the [Not Listening, Not Listening; You’re Bullshitting, You’re Lying] mode like some kind of CEO novel’s FL, explaining would just be wasting saliva!’

Thus, she simply gave Qin Langyue a profound look before shifting her gaze to the mob surrounding her. Her words dragged slowly when finally opened her mouth, spoken in a peculiar tone, “Want the Rainbow Lotus?”

“Do you even have to ask? Hand it over!”

The person was promptly ignored as Shi Sheng continued, “Well, it’s not impossible for me to do so…” She paused, and then her eyes curved in mirth. “How about you hand over Qin Langyue in exchange?”

“Qin Langyue? What do you want her for?” The mob was filled with doubts upon hearing the condition. ‘Did these two have any enmity?’

“None of your business. I’ll give you time to consider it, so what will you do? Either you hand over Qin Langyue, or I destroy the Rainbow Lotus.” Shi Sheng spoke matter-of-factly, as if the treasure truly was in her possession.

“And don’t think of trying anything funny. I can destroy it much faster than you people can snatch it.”

Considering Shen Yaoguang’s current cultivation level, it was guaranteed that no one was capable of stopping her in time if she decided to act on her threat.

“How do we know if you really have the Rainbow Lotus?! Take it out and show it to us!” A random idiot suddenly interjected.

Shi Sheng couldn’t help the snort that burst out. “First you insist that I have it, and now you want proof? Are you clowns jumping around to amuse me or are you just having fun? ”

‘Did you feed your IQ to the dogs?’

Shi Sheng then continued with a half smile, “Well then, since you suspect it’s not on me, piss off!”

“Shen Yaoguang, don’t try and fool us! The Rainbow Lotus is definitely on her!”

The first sentence was directed to Shi Sheng, while the ensuing declaration was addressed to the crowd.

The idiot who had posed the dumb question shut his mouth when he was whacked by his buddies.

As silence befell the crowd, the only sound audible was the constant splashing from the lake. The tendrils appeared to be unable to leave the water, with their lengths limiting them to reach only a meter or two inland.

Those hair-like tendrils writhing frantically above the lake made for a queer sight indeed.

The magic beasts appeared quite afraid of these tendrils because they didn’t attempt to cross the lake and instead, just committed to observe from the sidelines on the opposite shore.

The cultivators on this side glanced at each other before delving into a deep discussion; it was apparent, however, that the decision had already been made as people had already been designated to keep an eye on Qin Langyue.

After all, this was a Rainbow Lotus! A single petal was equivalent to one Spirit Sage, so it was a very worthwhile exchange to obtain the lotus at the price of a single woman.

After some feigned deliberation, they turned towards Qin Langyue.

The girl exerted every effort to remain calm, but the rage in her eyes was irrepressible.

She had plotted against Shen Yaoguang, but hadn’t expected a counterattack.

She couldn’t reveal that the Rainbow Lotus wasn’t actually in Shen Yaoguang’s possession. Adding to her predicament, aside from physically fighting her way out, she currently lacked any other methods that would allow her to survive this ordeal.

“Who dares to touch my woman?!” When the people who wanted to seize Qin Langyue neared the two, her latest beau placed her behind his back as he hissed aggressively.

A Snake King who could transform into a human figure was at the very least on par with a human Spirit Sage. The moment he released his aura, those with a lower cultivation level felt their legs turn into jelly under a pressure not unlike that of Mt. Tai pressing down on their backs.

There were still quite a number of Spirit Sages present however. If they actually came to a standoff, the Snake King would lose the match. Thus, rather than getting scared off by the Snake King, they shot Qin Langyue looks with newfound disgust.

“She’s actually together with a beast… Qin Langyue, I never expected you to have such vulgar taste!”

“Even if he can take on a human form, he’s still an animal…”

As their words got more and more scathing, Qin Langyue felt killing intent fill her heart. ‘I was forced into being together with that Snake King! That’s right… it was Shen Yaoguang!’

Because of the suspicion she had about her predicament, she’d questioned the Snake King about the events that led up to their battle, learning about how he had been lured over to the Wolf King’s territory.

Since a similar instance had occurred with the Wolf King, she eventually deduced that it was Shen Yaoguang who premeditated it all.

Her cold gaze landed on Shi Sheng, whose lips curved upwards to form an obnoxious smile.

This caused Qin Langyue to feel increasingly perturbed with the impression that Shi Sheng was relishing in her foolishness.

“You guys done yet?” ‘For fuck’s sakes, villains die from talking too much, ya know? See that look in FL’s eyes? Once her cheat comes back online, you lot are all just going to be punching bags… Bunch of idiots.’

Their expressions twitched, but no one dared to snap back at Shi Sheng.

Some cultivators took this as a cue to attack the Snake King instead. As he was lured away from Qin Langyue, she became more and more exposed to enemies from all sides—with her cheat inactive and numbers on their side, there wasn’t much to be wary of aside from her cultivation level.

This was one of the disadvantages of a growth-type female lead. If you encountered a villain that didn’t adhere to stereotypes, you’d be killed in minutes—forget about having the last laugh.

Snake King and Qin Langyue were both eventually captured and delivered to Shi Sheng.

“Go cripple her cultivation,” Shi Sheng casually pointed at a random cultivator and commanded him.

Shi Sheng shrugged indifferently. “Well I’m adding the condition on now, ‘kay? You lot still want that lotus or not?”

He glared at Shi Sheng before ordering someone else to do the job.

“Shen Yaoguang, we have no enmity between us! Why are you doing this?” Qin Langyue was beginning to get frightened.

She was perfectly aware of what kind of fate would be waiting for her was if her cultivation was crippled, so she had to stall for time…

Stall till her contracted beast could wake up.

Shi Sheng didn’t bat an eyelid as she urged the cultivator, “Hurry up already. What, you giving birth to a pup or something?”

The manglared at Shi Sheng but still hurriedly made his way to Qin Langyue’s side.

“Shen Yaoguang, at least tell me why! Why are you always opposing me, to the point of demanding my death?!” Qin Langyue ranted in an attempt to ease her anxiety.

“I’m not forcing you to die, so what’s with that ‘ demanding my death’ nonsense? Don’t be so overdramatic.” Shi Sheng gave a smile, but her expression soon returned to its former ferocity. “Well? Do it already! Don’t you know how to do it?”

Don’t be so overdramatic…

‘Having your cultivation wasted is a fate worse than death, okay?! Yet this woman speaks like it’s not serious!’

Qin Langyue wanted to continue speaking, but the person had already begun forcing his spirit energy into her body via her forehead with his palm.

The foreign spirit energy surged throughout her body, brutally destroying her meridians, engulfing her in excruciating pain.

“Aaaah!!!” Qin Langyue couldn’t bear with the pain as she shrieked. Everyone’s scalps grew numb as they listened to her cry out in intense pain. 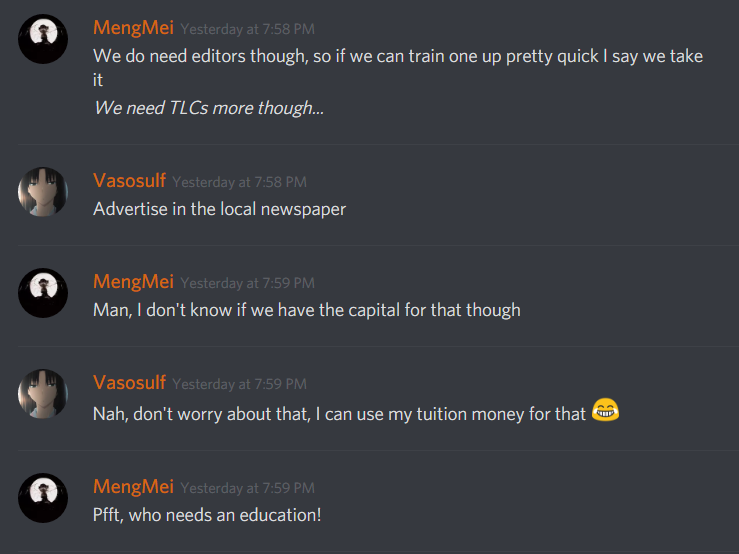 Want to get Vaso to misuse his tuition money in another way ? Join the team! We’re looking for editors and translation-checkers (especially the latter) so we won’t need to resort to snatching firstborns and training monkeys.
Come, come, join us now!