Happy holidays, BlobTV viewers! Have you already finished with your xmas shopping? Are you looking forward to hanging out with friends and family or some quiet, peaceful time alone? Well, for those who won’t even get vacation time and still have to go to work…my most sincere condolences…

But anyway, right now I’m at the peak of a mountain where a certain sect resides! Does it look familiar? 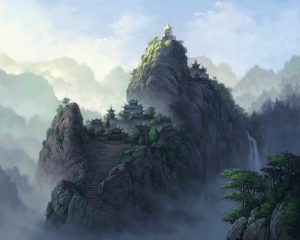 A whole mountain surrounded by water on three sides, with a view of furious green waves and trees rippling in the breeze…Chirps of birds and insects mingling with cries of cranes once in a while, and occasionally, a fleeting glimpse of white silhouettes in the sky…A magical aura skimming over the mountain there and then…

Ahem…yes, I ripped that off from the description of the Fuyao Sect’s mountain…

But okay, okay, I’ll skip right into the matter and to why I’m even here in the first place — to meet up with one of BlobT Entertainment’s freshest and cutest idol units, Mingli!

For those of you who read the novel Liu Yao: The Revitalization of the Fuyao Sect, you probably recognize the duo whose hard work and effort recorded the happenings in the Liu Yao storyworld and brought it to us English-speaking mortals~!

Translator-chan Nanming and editor-chan Alice Shiki have infiltrated the sect as two maidservants of the First Senior Brother Yan Zhengming. Using the notes they have diligently jotted down, we have found a suitable time when the disciples, the master, and everybody else are busy doing their own stuff so that Mingli can meet us here for a quick interview — oh, speak of the devil!

Now don’t you two look adorable? These uniforms sure are cute~! Mmm…as expected of the narcisstic master who resides in the Land of the Tender, he knows how to dress his minions in style!

So Nanming, Alice, we’re going to ask you a few questions.

1) Which Liu Yao chara is your favorite?

[Nanming] Definitely our first senior brother, Yan Zhengming! Although he just seems to be an unpleasant guy for now, one of the best parts about this story is that you can see how YZM grows from a spoiled boy into a reliable man. And who wouldn’t love a young man that is tsundere and sometimes so seme-ish?

[Alice Shiki] It’s a bit hard to answer as I only read a few chapters so far, and I honestly liked most of the characters, Liu Yao was a novel I actually didn’t expect to like as I’m not really fond of xianxia at all, yet I absolutely fell in love with it super duper quickly! I really love the characters a huge lot!!!!

That’s not really an answer, is it…?

I think my favorite one right now is Li Yun. I like how he is pretty arrogant and full of self, but also a pretty free-spirited person, and that even though he is pretty scheming and the like, he also cares about Han Yuan considerably, I think it’s a really nice trait of him.

I also like the fact that he also puts a strong facade, but is also a scaredycat in face of real danger, it’s not common to see this kind of weakness depicted, but it’s a very real feeling we all feel, so I think it makes him a really nice character!

[Nanming] I’d like to be in an insignificant sect cultivating secretly and one day suddenly make it big in the cultivation world.

As for the title, how about the Mistress of Chi-Mei-Wang-Liang?(魑魅魍魉). Each character has a “鬼”(ghost/demon) component in it, so the title basically means the mistress of all evil things. Sounds very badass, doesn’t it? I am probably a demonic cultivator then… 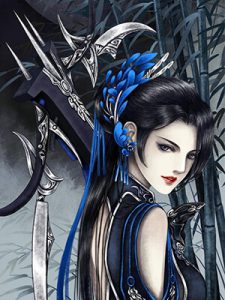 [Alice Shiki] That’s actually a really hard thing for me to answer, because… As I said, I rarely read any xianxias in the first place!!! >.< I’ll try answering to the best of my capabilities though!

I think I would try to join a friendly, small and non-ambitious sect. Big communities tend to get a really big and scary hierarchy, and involve themselves in a lot of deep troubles that often end up causing troubles to the lower positions… I think a small community is usually best, one in which you can become close friends with the head and have a casual chit-chat with them is best… I wouldn’t need any particularly ambitious goal, just try to enjoy the trip forward and do my best at my own pace… I think it’s the kind of environment I would aim for…

I wonder if I answered the first part of the question with this… I mean, are xianxia sects more deeper than that? Do they have different sects for different types of studies or something? I don’t know any of that!!! >.<

Ah, moving on… My pompous name/title? That’s… Well, I’m not that fond of chuuni names tbh, I do like to call myself a Magical Girl of Love and Justice, but I don’t think that would fit a cultivation setting very well…?

Hmmmmm… It’s a really hard to answer question, I would probably be good with anything cute that my friends decided for me, I think that would be good enough. I tend to not be very picky with those things, though if I dislike a nickname, I do everything I can to stop people from using it! >.<

[Nanming] I know it’s weird but I’d describe it as blood circulation. (

) I am like some clots in the veins as I provide the roughly translated chapters, while AliceShiki-Chan as the editor who makes my translation more fluent and enjoyable is like a powerful medicine that eases the blood flow so that the entire body (you readers) will feel more comfortable. What am I talking about…

Nan-chan is a really lovely and sweet girl that totally conquered my heart! You know, when I decided to edit for Liu Yao, it was more because I didn’t want her to feel there was no team to support her back when she joined BlobT, we were in lack of editors, she asked and nobody volunteered for it… So I decided to give it a shot! I thought I could just give up if I couldn’t keep up with her release pace anyway! >.<

Well, I did say she conquered my heart really quickly, didn’t I? Not only did I fall in love with Liu Yao, but I felt a really strong affinity with her, I really love working with Nan-chan and definitely want to accompany her for as much as I can! I have no idea how big Liu Yao is, but I assume it’s big (since most xianxias are), so I can’t promise I’ll be there for the whole trip, but I definitely want to try! I really enjoy working with her and really really want to stay together from now onwards!

I’m actually a bit of a self-depreciative person, I always think my edits aren’t good enough, or that my work isn’t that great, yet she always gave me lot of thanks for my hardwork and usually was pretty thankful for my edits, this really boosted my self-esteem with editing as well! I think this made Liu Yao get even more special for me! …

I’m a bit of a terrible girl with schedules though, it’s rare for me to miss deadlines, but I tend to leave things for the last minute all the time… So I think I always give her extra trouble by reviewing my edits right at the last minute… I wanna get better! I wanna finish my edits in advance to not have to give this kind of work to Nan-chan on the future! >.<

Overall, it’s a great translation team that makes me very very happy to be a part with! I hope we can keep on being in a wonderful relationship together! \ (^^)/

4) Do you have any planned projects after LY?

[Nanming] To be honest, there’s one that I am interested in, but considering the fact that there’s still a long way to go to finish Liu Yao, that’s hard to say.

[Alice Shiki] Ah, I do! It’s actually related to my original plans back when I joined BlobT, I actually wanted to translate only the novels from a particular friend of mine that I care a lot for, I don’t think I’ll pick any projects that aren’t from Nan-chan or her, but I do intend to work my best with this friend too, she is someone I really want to be together with…

She will be the one translating though, and I’m fine with anything she picks, so I don’t have any specific project in mind! xD

[Nanming] Thanks for reading this piece of work, your support motivates us to continue our work. Hopefully we can reach the end of the story together! （╹◡╹）And, Merry Christmas!!

[Alice Shiki] Please continue supporting us and I hope you all enjoy reading Liu Yao as much as I do! ^^)/

Ooh~ So cute! Thank you so much for setting aside some time to sneak out and answer our questions! I’d love to chat some more, but we can’t just keep you here for too long. Thank you for all your hard work, and good luck!

See what I meant about those two being adorable? We’ll be having an interview with the team covering the world of Garudeina next time, so stick around the channel tomorrow! See ya~!