Happy holidays, BlobTV viewers! We are currently located just outside Gardina, a splendid, up and coming city for demi-humans! 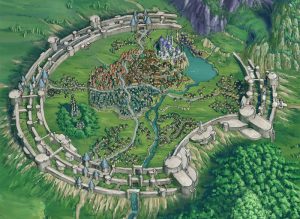 It is a medieval European-style town in the middle of a forest of the same name, and is developing day by day. According to trusted sources, the founder and leader Dragunir Georg has a grand 100-year plan that aims to turn it into a mighty nation that can rival human countries!

Though it’s a small city for now with less than a thousand residents, it’s still a pretty impressive feat considering it was literally built up from scratch.

Thanks to the combined efforts of the Garudeina Oukoku Koukoku Ki team — Innocent Puppy/Osamaru the translator, Ars the editor, and Caelum the translation-checker, we are able to see the progress of Gardina’s rise to power from the comfort of our screens, so please join me in giving them a round of applause!

Woah…you guys really look like demi-humans! Are these ears real? Can I touch them? …Ahem, sorry. Your disguises just look too much like the real things. Shall we start?

1) If you were a real demi-human in the GOKK world, which type would you want to be?

[Innocent Puppy] – /o/ Dragon! Duh! Na, but really, I’d go with the Dwarves. Would be interesting.

[Ars] I think it would be fun to be a dwarf, with quivering muscles petted by Georg-sama. (A cute one though)

[Caelum] Probably a fox. Those fluffy tails can’t be beat. I would’ve chosen a bird, but they’re not as fluffy.

2) What’s the meaning behind your usernames?

[Innocent Puppy] Innocent Puppy started out as a Joke, and kinda stuck. Besides, I am a pure and Innocent being! Osamaru is a Japanese Verb that means “to bring to a closure”, “to settle agreeably”, “to be put back in its (rightful) place” among other things.

So sum it up in English, it could mean “to make things right”

[Ars] It’s cool, easy to say and sounds like my favorite thing in the world.

[Caelum] I used to use 空へ as a username as I like the motif of a bird flying up to the sky. But apparently, it was taken. So I went with the next language I studied: Latin!

[Innocent Puppy] They’re both great workers who do a good job and make sure that everything is neat and trim. I feel kind of lazy sometimes when I compare, HAHAHAHAHAH!

[Ars] I like Osa (Innocent Puppy) and Caelum, and if we were adventuring together I think we would be one of those harmonious side-character NPC parties that tries their best to muddle through at the side of the big bad protagonist (cough maknae’s) party.

[Caelum] Innocent Puppy and Ars really do their best. If this was a RPG party, then Innocent Puppy would be the tank, taking the raws headfirst. I would be the support, healing the tank whenever his HP (sanity) gets too low. And Ars would be the DPS, finishing up the job. While I can solo dungeons, it’s more fun with a party.

4) Do you have any planned projects after GOKK?

[Innocent Puppy] orz… at our current pace, that won’t be for a while. though if someone comes in and co-translates I had a few I am looking at.

[Ars] For translations, not sure! If someone wants me, visiting hours for my summoning shrine are from 3-7pm, bring food or cute people.

[Caelum] So far, I’m translating a short, humorous story, but after that, I’ll probably try to find an actual novel. And when that happens, yoroshiku ne~

[Innocent Puppy] If you are looking for someone to complain to about the slow Release speed, I volunteer whoever told me MTL would be “Fine”. rocks in his corner

[Caelum] We’re just a bunch of fans trying to translate, so we’re not as fast as all the other pros here on BlobT. But, we will continue to bring you the best we can, so please bear with the wait and enjoy.

Thanks for taking the time to meet us! You must be all so busy leading double lives — working on the city, and recording all the happenings unbeknownst to a powerful mage like Georg. On behalf of everyone who reads the novel, thank you for all your hard work, and good luck! Fighting! \o/

Tune in tomorrow and join me in a visit to…well, a secret location is all I can say for now. See you~! o/