Volume 1: Descent of the Demon Lord

The “Great Empire” that ruled the majority of the world began a terrible GAME.To solidify its rule over the countries it had conquered, to root out the seeds of rebellion, it hosted a cruel, extensive “show” as a warning.

It could only be thought of as madness, the game being —

Random “players” were selected from the citizenry of the various kingdoms that had become vassal states and were forced to kill each other until only one remained.

The Great Empire televised it all over the world and allowed gambling.

With a brutality and reality greatly surpassing that of movies, the game grabbed hold of the hearts of the people – the empire citizens.

The GAME broadcasted to the entire world — there were countless dramas, star-crossed loves, to live on complete strangers were killed, the “bare face” of humanity was revealed.

Human racing, the game of life, the spider’s thread — the GAME was called by various names. The great wagers that the bored wealthy pumped into the GAME gradually became an essential resource for the empire —

The “kingdom citizens” who were on the side being chosen, trembled in fear.

The “empire citizens” who watched, were intoxicated by the insanity and amusement.

To the one who won, great wealth — and a ticket to becoming an empire citizen.

But what awaited all the other participants, without exception, was death.

“This event, how nostalgic…”

At this time, there was still a man participating in such a terrifying “game.”

But his expression held no fear or dread.

His name was Oono Akira — a working adult that could be found anywhere.

Perhaps he could be called a familiar type of person.

He was the one who personally administrated this game. Being thoroughly familiar with the venue, there was nothing for him to fear.

After all, the game was inside the screen of a PC and held no bearing on reality.

“It was a long lasting hobby.”

The man muttered in a barely audible voice.

The game began in 2001. The dawning of the internet age.

That long history — would end today.

Akira tapped his keyboard, occasionally vigorously moving his mouse, the game screens changed one after another.

As far as one could tell, there was no particular purpose.

He just appeared to be trying to burn all that appeared on the screen into his eyes.

It was normally the time the game would begin, but there was only one man present at the venue.

Once it was midnight, the contract with the server would expire, and the entire game venue would vanish. The man chose not a farewell of many, but of one.

You wouldn’t normally begin to imagine a game that lasted longer than compulsory education.

Kids who were in middle school when the game began, would now be splendid working adults. Among them, there were those who married and became parents, even those who went overseas.

Gaining positions with responsibility, they lost their free time.

— certainly, that should be said to be normal and healthy.

He was no exception.

In the past, he freely obsessed over the game design, sometimes even forgetting to sleep, he immersed himself in game administration. But as the months and years past, Akira obtained a position, and the greater part of his time was taken by his job.

“What area should I go to next…”

The man logged into the character that could be called the game’s last boss, and walked to various areas until the last possible second. Sometimes a residential area, sometimes a remote temple, there was even a deep lake where the bottom couldn’t be seen.

Each of those places must have been a memorable place for the man.

“Kunai, thanks for your hard work.”

Akira spoke to the character within the screen. If you watched from the side, it was a slightly eerie sight. 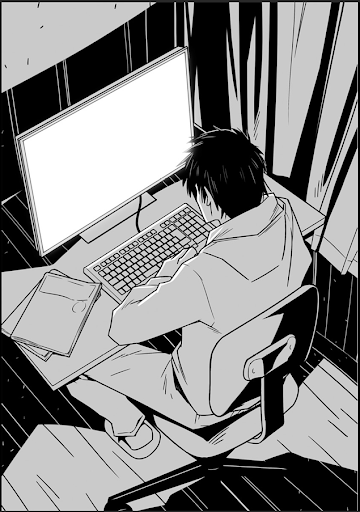 Within the screen was a man whose hair nearly reached his shoulders. His age was over 40, but his body was extremely built, and his looks were extremely sharp.

His backstory was a high official of the empire as well as organizer of the notorious game.

The victims (users) of the GAME numbered 4,143,792. The demon lord of the Great Empire who had brought about such colossal amount of bloodshed and grief.

Even facing the end, the callous eyes and scornful smile on his face didn’t change.

“I didn’t think I would spend the last moments with you… not even in a dream.” he said as if trying to escape from Kunai’s sharp gaze.

Even after hearing those words, Kunai’s expression didn’t change. Of course — he was just an NPC that wouldn’t move unless he was logged in.

Even so, as if trying to escape from something, Akira continued to spit out words in quick succession.

“You look displeased? I’ll tell you this, even if you’re the last boss, or a demon lord, you can’t beat reality. If you haven’t played enough, continue on your own — I have to sleep in preparation for tomorrow.”

Akira, filled with many emotions, closed his eyes. When he opened them next — what reflected in his eyes was a great forest.

There was a world abandoned by the gods, in which the angels despaired.

If you listen carefully, you should be able to hear.

Because the bell of midnight, is the melody that signals the activation of “you” —